Crackdown on Christianity in China ramps up

Persecution rising toward levels under Chairman Mao. “The days are coming when whole Christian families will find themselves unable to access not merely transport, but schools, hospitals, bank loans and jobs”, a source says. 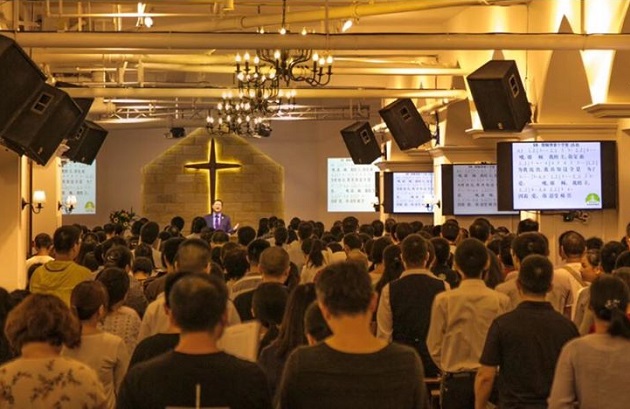 As more government officials in China are empowered to close churches and a “social credit” system threatens to block Christians from schools, bank loans and jobs, authorities have taken harsh measures against more churches, sources said.

In Beijing, Early Rain Covenant Church elder Qin Defu was sentenced to four years in prison on Nov. 29, according to advocacy group China Aid Association (CAA). Qin was charged with illegal business operations as a result of the church using 20,000 Christian books, according to CAA.

Authorities had promised his family that he would be released if he accepted a state-appointed attorney, the group stated.

The charge on which Qin was sentenced could signal a stiff sentence for Pastor Wang, who has been charged with both “inciting subversion of the state” and illegal business practices after being arrested more than a year ago.

“Qin’s attorney said the church’s pastor, Wang Yi, admitted in a testimony that he was involved with these books,” CAA reported. “As such, the lawyer speculated Wang would receive no less than a 10-year sentence.”

Authorities on Dec. 9, 2018 arrested Pastor Wang and more than 100 members of Early Rain Covenant Church; most of them have been released, while Pastor Wang’s wife and child remain under house arrest.

In Shanghai, authorities raided Wheat Church on Dec. 1, broke up the unregistered body’s worship service and ejected members, accusing them of conducting religious activities at an unapproved venue, according to CAA.

The 200 Christians refused to leave, remaining outside in the cold as they sang and worshipped, according to CAA.

The actions are part of progressively harsher measures against Christianity and other faiths deemed a threat to the rule of the Chinese Communist Party (CCP) since Xi Jinping became president in 2013. New religion regulations introduced in 2017 greatly expand the number of government departments that can enforce restrictions on religious practice, an attorney in China told The Epoch Times.

“Under the previous law, only the Religious Affairs Bureau would enforce religious restrictions,” the unidentified attorney told the news outlet. “Under the new law, every layer of government can regulate religious affairs. The fact that there are so many more officials cracking down on unregistered churches puts tremendous pressure on the members of those churches. As part of this crackdown, Chinese Christians are facing the most persecution since the Cultural Revolution in the 1960s.”

In ultra-nationalist efforts to stop ordinary citizens from engaging in religion and other activities deemed a threat to CCP control, China has installed 20 million surveillance cameras with advanced facial recognition software to collect data for the purpose of establishing a “social credit” system to monitor perceived loyalty and dissent, Elizabeth Kendal of the Religious Liberty Prayer Bulletin notes, citing author Willy Wo-Lap Lam in his book, “The Fight for China’s Future.”

The system is expected to be fully operational in 2020, but Kendal notes that non-compliant Christians and others, such as human rights attorneys, already find they cannot travel as negative social credit prevents them from purchasing a train ticket.

“The days are coming when whole Christian families will find themselves unable to access not merely transport, but schools, hospitals, bank loans and jobs,” she writes.

Such measures flow from the CCP in 2012 formulating five new “black categories” of groups to be quelled – human rights lawyers, underground religious practitioners, dissidents, commentators influencing opinion on the Internet and disadvantaged social groups, Kendal states. The list echoes the “five black categories” of the 1966-1976 Cultural Revolution, when Chairman Mao Zedong designated landlords, rich farmers/peasants, counter-revolutionaries, evil influences and rightists as enemies of the communist revolution to be neutralized – re-educated and if necessary eliminated, she notes.

With courts beholden to the Chinese government, authorities commonly charge pastors with subversion as religion is regarded as a threat to the CCP and stability, according to the attorney quoted in The Epoch Times.

“These pastors have no right to legal representation,” the attorney said. “If they have someone brave enough to be their lawyer, the pastor can be beaten up before seeing that lawyer. And their attorney can be beaten as well.”

The subversion charge against Early Rain’s Pastor Wang calls for a sentence of up to five years, or 15 years in extreme cases.

He was a human rights activist and a constitutional scholar before becoming a pastor.

Under the new religion regulations, house churches have been forced to dissolve if they refuse to register, according to the attorney quoted in The Epoch Times, adding that those registering are subject to surveillance, monitoring of sermons and other heavy-handed measures.

China ranked 27th on Christian support organization Open Doors’ 2019 World Watch List of the 50 countries where it is most difficult to be a Christian.

old sarge
18/12/2019
04:25 h
1
A truly sad state of affairs. But hardly surprising. And the 20 million surveillance cameras is a serious threat that could be used during end times by the anti-Christ.