China, the biggest producer of Bibles

Although China is officially an “atheist country”, it is also where most Bibles are printed. Amity Printing plans to reach 150 million this summer. 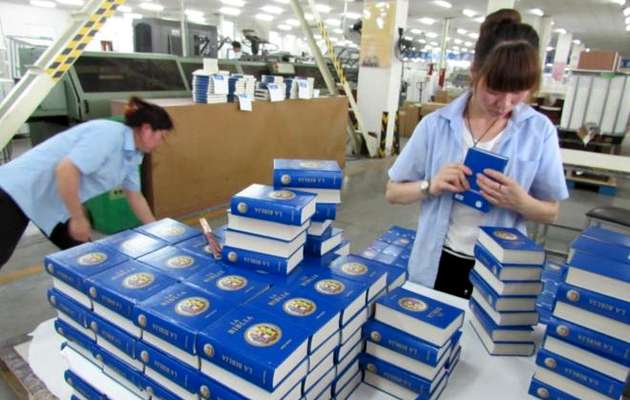 El Mundo, a Spanish newspaper, entered in the biggest Bible factory of the world, which has the size of 8 football fields. It belongs to a Christian organisation with 600 employees who print 70 Bibles per minute.

Mrs. Ma recalled that the church of Monchou Road Nanjing in China was confiscated, as many others in 1967, at the beginning of the Cultural Revolution, and it did not function as a Christian church again until 1980.


THE RED BOOK OF MAO

"It became a printing house for the Red Book of Mao (Zedong)", she explains sitting in one of the units of the building. During those turbulent years (1967-1977), the Red Guards confiscated and burned Bibles.

The Red Book should be the only ideological reference. For Chinese families, just reading the Bible became an almost subversive activity. "My family had a Bible that we kept hidden. We met at home and other Christians copied passages to read them later.

Usually, people keep handwritten chapters of the Bible and put them all together when they met, to read the whole book" recalled the 69 year old woman.

The Amity Printing is a few kilometers from the evangelical church where Ma goes, in the city of Najing (South China). The contrast between her memories and the incessant activity taking place at the printing, summarizses the immense changes in the Asian nation in recent decades.

A good illustration of the big differences between then and now, is the few tens of bibles made clandestinely during the Cultural Revolution, and the cover copy of the most exquisite bamboo that Amity produced in 2012 to commemorate the printing of 100 million bibles.

"There's only a thousand copies of this edition. Bamboo requires a lot of water, and for us the Bible is `living water´. Besides, in China bamboo is associated with integrity" John Zhang, a spokesman of the company, explained.

According to the president of Amity, although China is officially an “atheist country”, it is also where most bibles are printed worldwide. The company plans to reach 150 million this summer. 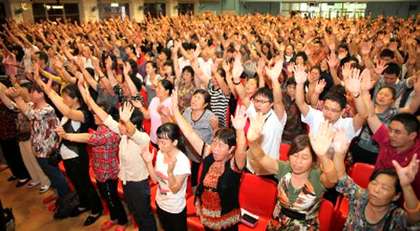 A worship center in Calcuta China

Amity Printing, which produces up to 18 million bibles a year, is a joint project of the Amity Foundation, a local Christian NGO, and United Bible Societies.

Its facilities are an endless succession of machinery, tons of paper (it consumes 100,000 per year) and 600 employees, capable of printing between 60 and 70 copies of the scriptures per minute.


SOLD IN CHINA AND ABROAD

"Half of our production is directed to Chinese Christians and the other half abroad. We publish bibles in about 90 languages and send them to 70 countries. There are not only Protestant but also Catholic Bibles", Vivian Wei Zheng, one of the directors of the Amity Foundation, adds.

Bible copies are sold in China for 32 yuan (just over 4 euros), a price below its cost of production. This is only possible becuase of the funds Christian associations give.

Ma has spent 20 years in Amity, in the department of bibles in braille. It was there, in 2003, where she became Christian. "For me this is a sacred job. Jesus gave me the good fortune to produce Bibles", she explains.

For Vivian Wei Zheng, “the answer is in the Bible.”

In addition to technical training, Amity also seeks to promote spiritual learning among its workers. "We are not a church. We do not proselytise, but it is true that we have a significant number of Christian employees, as well as well as members of the Chinese Communist Party" (CCP).

"We often organize talks for workers with clerics and Christian figures. We try to make them aware of the special nature of this company that produces Bibles, a book that can change the world. We want them to understand that their performance has a huge significance", Zheng, a Christian herself, says.


EVERYTHING STARTED WITH PRESIDENT CARTER

The origin of Amity Printing Company is closely related to the meeting Deng Xiaoping and the then US President Jimmy Carter had in 1979.

Carter, an evangelical Christian, asked the Chinese leader to reopen the churches closed after the Cultural Revolution, to allow the printing of Bibles, and the return of the thousands of missionaries who had been expelled from the territory in 1950. Deng agreed on the first two requests and rejected the latter.

Deng Xiaoping's decision marked the revival of a religion that for nearly a decade had gone underground and now exceeds 60 million members.

However, since Xi Jinping came to power, the situation is not easy.

He recently warned about the alleged "foreign infiltration through religion" and urged leaders to remain "unconditionally atheists".

Beijing suspicions have resulted in an onslaught of power against Christian symbolism in Zhejiang, where hundreds of churches have seen the crosses crowning their buildings destroyed.

All Bibles for the domestic market are sold through associations such as the China Christian Council, which brings together Protestant churches controlled by Beijing.