Samarkand and the new superpowers: geopolitical changes as challenge for mission

Most Christian mission projects rely on Western support. As soon as a given nation or a critical part of a given society turns against the West, financial support will dry out or even criminalised. 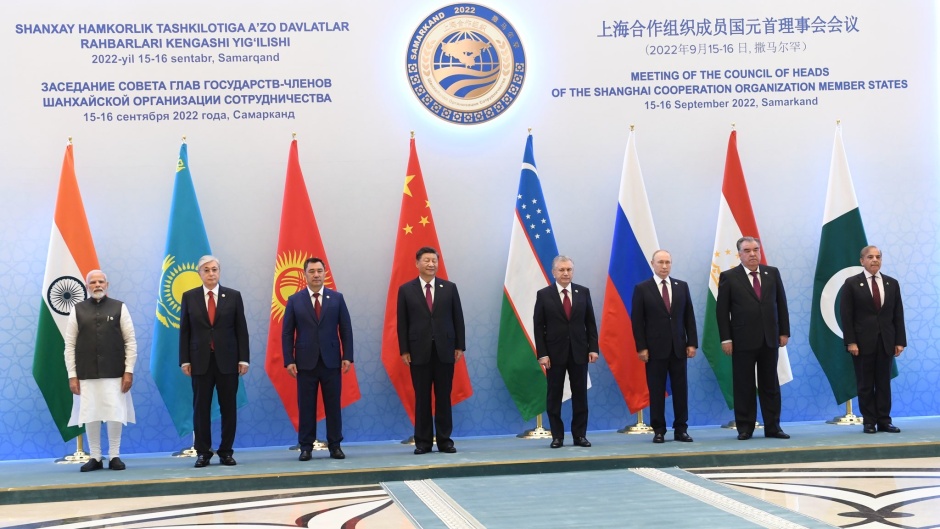 Photo of the leaders of India, China, Russia and other countries of the Shanghai Cooperation Organisation gathering in Samarkand, 15-16 September 2022. / Photo: SCO.

The Anti-Western Alliance is forming

The presidents of Russia, Vladimir Putin, and China, Xi Jinping, met on September 15-16 in the ancient city of Samarkand, Uzbekistan with leaders of several Asian countries: India, Pakistan, Turkey, Iran and other countries for the meeting of the Shanghai Cooperation Organisation (SCO).

The SCO was founded in 2001 as an economic, political and security network by China and Russia and includes India, Pakistan and the Central Asian countries as members. Several other Asian countries are listed as partners, including Turkey, Iran, Mongolia, Belarus, Azerbaijan, Armenia, Nepal and Sri Lanka. It was set up as a rival to Western alliances. According to the Russian foreign policy advisor Yuri Ushakov the “SCO offers a real alternative to Western-centric organisations. … All members of the SCO stand for a just world order”, he said, describing the summit as taking place “against the background of large-scale geopolitical changes”.

The SCO is not a military alliance like NATO, but rather a platform to discuss joint security issues and promote trade. But it is obvious that both Russia and China are vividly interested to build a strategic alliance as counterweight to the global dominance of the United States and Europe. They no longer seem to be willing to accept Western rules of international co-existence.

The SCO countries are largely responsible for the relative success of Western sanctions on Russia after Putin invaded Ukraine, buying Russian oil and gas and offering ways to undermine sanctions. China, India and Iran, for instance, easily compensate the losses of income through Western sanctions. It is clear that SCO marks one of the new geopolitical realities and a potential superpower opposing the Western democracies.


What about the challenges for mission of the church?

How do the geopolitical shifts in the world affect Christian mission? What happens to missions when the opposing worlds clash? How wise is it, to concentrate on promoting one certain political system? Is Western democracy the only platform to grow Christianity in the world or would alternative systems also work?

Those are the urgent questions, Christians all around the world need an answer for. At the end of the day, the vast majority of the world's population and also the majority of the Christian population lives outside the Western world. And the growth of the church in Western democracies is dangerously low.

In my own country, Germany, the number of those who leave the Christian church has reached in 2021 more than 600,000 people. According to the church-political observer Matthias Kamann, German churches have lost all their control on their membership development and the permanent decline. Some even call Germany the most unbelieving region in the world. George Barna claims a similar decline of Christianity in the US. In fact, Western churches lose their members by millions. But millions of new converts flood the churches in the non-Western world.

At the same time, conservative Christians leave the West and settle in politically neutral countries like Paraguay and Bolivia in Latin America, and Hungary in Europe, just to mention some. 1,5 million Germans have left my country during the last 10 years. Not all of them are Christians, of course, but the vast majority left their homeland because of the socio-cultural developments.

Recently I asked one of those migrants to Hungary, why he decided to move out of Germany to a country, where he would have to work hard on learning the language and understand the culture. The brother replied: “I want to escape the system, which in my eyes is not only individualistic, liberal and decadent, but also in principle anti-Christian”. And then he referred to the gender-debate in Germany. “God made men and women, but the liberal West breaks all rules of creation, and my children are taught to reconsider whether they are male or female, or even some kind of neutral being. No, this is more than enough for me. The Western culture is godless, but I will educate my children in obedience to God.”

It makes sense to revisit the issue of systemic collaboration between Christianity and Western culture.

The strong relationship between the church and the Western-centered societies might soon challenge our mission in various ways. Just consider the following.

1. The church is viewed in many countries of the world as an expression of the Western culture. Sure, this is, in reality, not the case, and the oldest Christian churches all claim a non-Western origin. But the general feeling is – Christianity is a Euro-American phenomenon.Wherever an indigenous society develops an anti-Western attitude, the church and her mission is automatically viewed as an agent of the West and will be potentially rejected or even persecuted. The situation of the church in China, Iran and parts of India supports this thesis.

India is especially interesting in this regard, since one of the oldest Christian churches in the world comes from India – the Mar Thoma church of India. And still, as soon as animosities against Christianity in India appear, the Western world is blamed.

With the growing geopolitical polarization, international Christian networks are, in my view, strongly advised to move their headquarters to politically neutral countries and imply a prophetic independent attitude to all political systems of the world, to avoid a too close association between Western culture and Christianity.

No, I am not suggesting, the church needs to become apolitical. She has a strong prophetic voice and is commissioned to engage with the unjust systems of the world, regardless of where they might be situated: in the West or the East, the North or the South. But the church should never engage in ideological party politics. As soon as she does so, she will lose her universal call to transform the nations of the world to disciples of Jesus (Mt. 28:19).

2. Christian, and especially Evangelical, educational materials are to a large extend Western products. Theological education is based on Euro-American concepts and follows their pattern. Here the critical minds beyond the Western world see the basic root of ecclesial dependency of indigenous churches from the West. The call of the third world theologians for a greater theological independency is since the end of the 1960 loud and much improvement has been made. Just think of the 1976 in Darussalam, Tanzania established Ecumenical Association of Third World Theologians (EATWOT) and the work of those, who labor here.

But, especially among Evangelicals the reliance on Western educational models is continuing to be strong. At the same time there has never been a time with so little societal relevance of Western theology as it is today. The Western theological faculty seems to have lost both the client (the church) as well as the university as a critical partner in scientific dialog, and doing so, lost her prophetic nature in church and society.

Due to the geopolitical shifts the churches outside of the Western world are strongly advised to develop their own, non-Western approaches to training leaders. And Western church is invited to learn from them. The initiative of the Theological Commission of the World Evangelical Alliance (WEA) called Re-Forma might show the way.

3. The Western world for centuries dominated the world’s economy, exploiting the best of the worlds resources to grow their own wealth. The indigenous population even in the richest places in the world, such as Congo in Africa, stays behind poor, while the Western societies prosper.

The prosperity of the West made the financially strong Christian and also Evangelical mission and relief agencies possible. The famous late Yale professor Lamin Sanneh assigned some of the enormous financial strength of mission activity of Western mission to a “guilt complex” of Western Christians. The West helps where the West creates the need for help.

Today most of the world’s Christian mission projects rely on Western support. As soon as a given nation or a critical part of a given society turns against the West, all Western financial support will dry out or even criminalized, as this is the case in Belarus, Russia and China right now.

Again, I would advise the Evangelicals to decentralize their financial support and remove the headquarters of international mission agencies to politically neutral places. Fundraising and financial support must stay as close as possible to the national reality.


Samarkand is just a beginning

It is naïve to believe that the SCO and her strategic gathering in Samarkand is just a random event and that the developments of new superpowers of the world will never ever overplay the Western democratic order. There are signs on the wall warning of a different scenario. And we, Christians, do well to be prepared.

Our missionary task is still far from being fulfilled. Many ethnic groups still wait for the gospel to come to their yard. It is unwise to block our ways to them by sticking to a political system which proves to be ambiguous, and which fosters a rapid decline of churches on the one hand, and growing movement of conservative Christians out of their Western home countries, on the other hand.

Johannes Reimer, Director of the Department of Public Engagement of the World Evangelical Alliance (WEA).

2. See in this regard my book: Johannes Reimer: Missio Politica. The Mission of the Church and Politics. (Carliste: Langham 2017).

5. Luke Timothy Johnson: Meeting the Theological Challenges of the New Century. Keynote address at the "Prophetic Voices" conference in March 2015.