The Chinese government aims to reinterpret and retranslate the Bible in order to enhance the “‘Chinese style’ of Christianity and theology”. 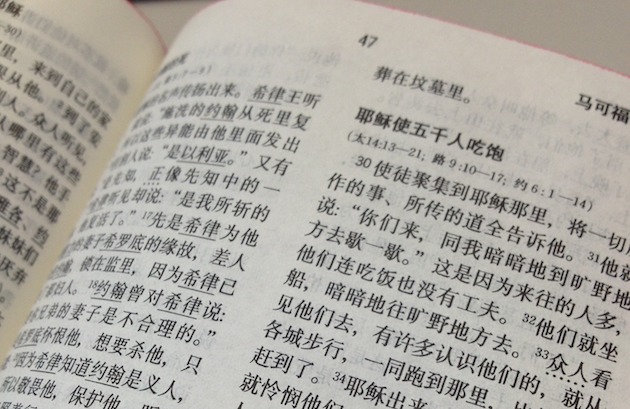 Only the bookstores of official churches can sell Bibles in China.

The strategies to control Christians implemented by the Chinese government have gone a step further in recent months.

The newspaper South China Morning Post reports that since April it is not possible to buy Bibles through popular online sales platforms such as JD.com, Taobao or Amazon.cn.

This limitation of the acces to the Christian Scriptures has not been extended to the religious texts of other religions such as Islam, Buddhism or Taoism.

The Chinese government has published a document describing how it intends to promote “Chinese Christianity” in the next five years, reports Christianity Today.

According to this document, one of the government's aims is to “reinterpret and re-translate the Bible in order to enhance ‘Chinese style’ Christianity and theology”.

Before the online commerce, Bibles could only be obtained in the bookstores of sanctioned churches. That made members of underground churches more easy to be tracked.

Today, Amity Foundation and United Bible Societies are the institutions in charge of the edition of Bibles in China. Amity Printing Company is the only printing company in China that has government permission to print Bibles.

United Bible Societies has referred to the current situation in an article in Eternity News. “After the end of the Cultural Revolution and in the early 1980s, the Chinese authorities allowed the Church in China to resume printing and distribution of the Bibles to meet the huge and growing needs of the Chinese believers”.

The Bibles “were approved for ‘internal distribution’: published by the Church in China for sale and distribution by the legally registered churches. Anyone could buy a copy of the Bible from those churches”. However, “over the years, some non-church bookstores began to sell Bibles and online stores also began to sell Bibles online. The authorities have, from time to time, stopped some non-church bookstores from selling Bibles, but they have not strictly enforced this regulation on online stores”, United Bible Societies says.

According to United Bible Societies, “the move to remove Bibles from the online stores (and from non-church bookstores) is part of the authorities’ efforts to enforce the regulations, which distinguish between internal religious publications and public distribution”.

Official government figures published this week shows that there are around 38 million Protestants and 6 million Catholics in China.

However, there are many more who gather in underground churches, outside of the state-sanctioned system. According to some reports, Christians in China now outnumber the 90 million members of the Communist Party.

This growth of Christianity worries the Chinese government, which has implemented various measures of pressure against non-official Christian churches in recent years. In the province of Zheijang, the crosses of some church buildings were demolished following a restrictive construction law.

Additionally, several churches have been demolished in recent years by the authorities.

In some rural areas, only those who replaced the images of Christ in their homes with those of the leader of the Communist Party, Xi Jinping, received public aid.