The Chinese legendary speed skater finds inner strength in the Bible, which she carries everywhere, even to the skating rink. An article by the United Bible Societies China Partnership. 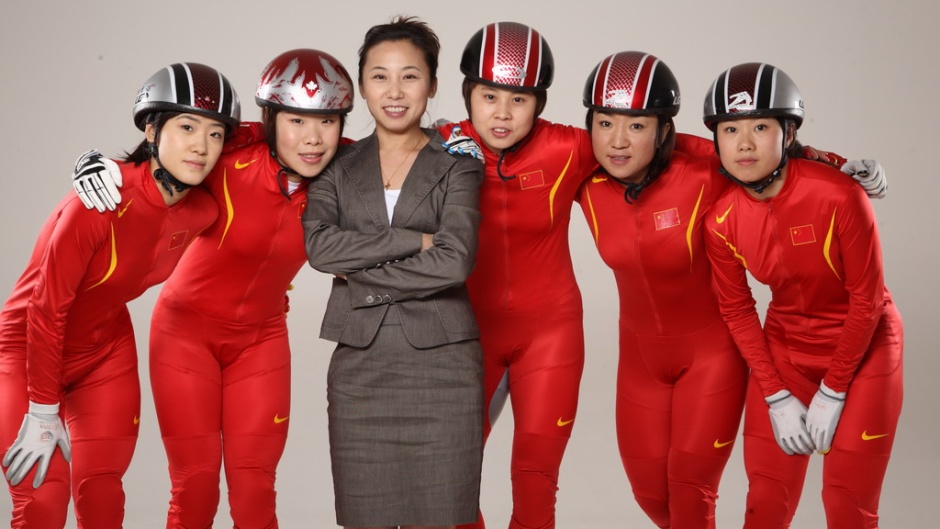 Li Yan (centre) with her team. / Atheletes in action.

Wang Meng is the four-time 2008 Olympic Champion, while Wu Dajing is the 2018 Winter Olympics Gold medalist and world record breaker who’s set to defend his title at the 2022 Beijing Winter Olympics.

But did you know that it was to the same person whom they attributed their success?

That person is their coach Li Yan, the legendary speed skater, known for her deep love for the sport, high commitment in pursuing excellence and openness about her Christian faith.

Back in 1988, this petite young lady from Heilongjiang province made history for her country on the ice skating rink.

The twenty-year-old was in Canada for the Winter Olympics, China’s second appearance after 1980, competing in the short track speed skating demonstration event.

Enshrined as the “Iron Lady on Ice” and “Godmother of Speed Skating” by the media, she won China’s first silver medal in the short track speed skating official event at the 1992 Winter Olympics.

That same year, she went on to bag two gold and All Round Silver medals at the International Speed Skating Championship, China’s best performance at that time.

Today at age 53, Li Yan, who is the President of the China Skating Association, has enjoyed a lustrous career not just as an athlete but also a gold medal coach, having trained national level speed skaters to their peak performances.

As the celebrated head coach of the once-in-the-doldrums China Women’s short track speed skating team, she led them to sweep all the speed skating gold medals at the 2010 Winter Olympics, unprecedented in the history of the sport.

She continued to create legend at the 2014 Winter Olympics when the China team won the highest number of medals for the sport.

This year, she is again leading China’s national speed skating team to compete in the Beijing Winter Olympics. What or who has given this small-built lady inner strength and helped her and her team to succeed?

In the midst of the gruelling practices on the ice rink, intensity of training, struggles and challenges of coaching, and even the accolades and accomplishment, she speaks about a God who has made all the difference in her journey.

When she was first appointed the coach of the China Women’s team in 2006, things were not smooth going. There were some grievances in the team and Li Yan struggled as a coach. During a vacation, Li Yan met up with her pastor. They talked about her struggles and prayed together.

“Through prayer, I received strength. I could let go”. Li said in an interview. God was doing a work of inner transformation in her, helping her to put down her own ego and to learn to forgive others.

She also recognised that she is an imperfect person with flaws; she needed the help of Christ Jesus to overcome her pride to lead the team well. It was an important moment of breakthrough.

After returning from the vacation, everybody could see the change in her. She began to take more initiative talking with the team, spending time with them to understand their needs, expressing her love and concern for them and even encouraging them with words from the Bible.

Personally, Li continued to find inner strength by reading the Bible, which she carried with her everywhere, even to the skating rink. The Bible is the book she would turn to when she needs encouragement and inspiration.

She reads it on the go in the day, before a practice and at night before she sleeps. A verse that helped her to overcome the intense stress during competitions was: “Do not be anxious about tomorrow… for each day has enough troubles of its own.” (Matthew 6:34)

Li Yan was soon able to taste the fruit of her labour of love and perseverance. At the 2010 Winter Olympics, under Li Yan’s coaching, Wang Meng won the gold medal for 500m short track speed skating, making history by winning the first Chinese gold medal in the sport.

Right after crossing the finishing line, Wang Meng went to Li Yan, kneeled and made a kowtow on the ice rink to express her gratitude. With tears flowing, both hugged each other with exuberant joy across the rink walls. Love had broken the ice and crossed barriers.

Wang Meng later said that Li Yan was “the woman who changed the history of Chinese short track speed skating.”

It was a change that likely first happened within a person’s heart that brought about the victory without. As a Christian, Li Yan believed that there is one true God. To her, this is true faith – that you believe in God from the depths of your heart.

The God whom she recognises is the One who has given her the strength and ability to lead the team.

Li Yan said, “The better we are, the more humble we should be. The honour does not belong to me. I could not do this by myself. All of these come from God. He gave me these abilities”.

From a twenty-year-old who broke world records in speed skating to being the most decorated national team coach who helped others to succeed, Li Yan has undoubtedly come a long way.

But what stands out more is that she allowed God to break into her heart to change and help her, to become more than who she is. What Li Yan has learned is perhaps best expressed in what she said, “Glory is temporary but growth is lifelong.” That’s a real breakthrough.

Cynthia Oh. This article was re-published with permission of the United Bible Societies China Partnership.